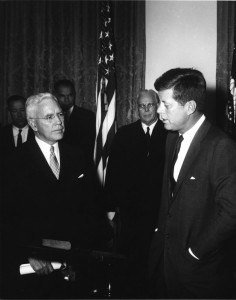 After the Bay of Pigs, John McCone replaced Allen Dulles as CIA Director. McCone foresaw the Soviet deployment of missiles in Cuba and ordered the U-2 flights on October 14 that discovered them. He took a hard line during the crisis. However, he thought a surprise attack on Cuba would force the U.S. to live with a “Pearl Harbor indictment”. Therefore, he argued that before an air strike, Castro and Khrushchev should be given warning and 24 hours to begin dismantling and removing the missiles. McCone believed a blockade would not be sufficient to resolve the crisis, as it would allow a long drawn-out period during which the Cubans could launch the missiles against the U.S.