Learning from History’s Most Dangerous Crisis

The question posed by this section of the site is: what can statesmen learn from the most dangerous confrontation in human history to better address challenges of war and peace today? Harvard’s Belfer Center has collected the lessons of many who have learned from the crisis. Soon, we will invite policymakers, scholars, students, and members of the attentive public to think about this question and propose lessons. 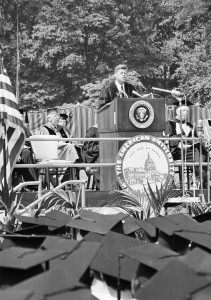 In his commencement speech at American University on June 10, 1963, President Kennedy discussed key lessons for the nuclear age. (AP Photo)

Section I of this site provides a succinct summary of lessons drawn by presidents starting with JFK, who in his oft-quoted American University speech just five months before he was assassinated, stated his belief after his experience in the crisis that, “nuclear powers must avert those confrontations which bring an adversary to a choice of either a humiliating retreat or a nuclear war.”

Section II summarizes lessons drawn by other policymakers. These include statesmen who participated in the crisis, as well as other policymakers, including Secretaries of State, Defense, National Security Advisors, and others.

Section III lists lessons proposed by scholars, including the most significant lessons from all scholarly sources that we have so far been able to identify.  Knowing that this list is incomplete, we invite visitors to help fill this yawning gap. Please submit a brief description of the lesson already drawn from the Missile Crisis, and by whom it was first articulated, along with a link to the source or citation information, here.