Beyond the Cold War

Fifty years ago, the Cuban Missile Crisis brought the world to the brink of nuclear disaster. During the standoff, President John F. Kennedy thought the chance of escalation to nuclear war was “between 1 in 3 and even,” and what we have learned in later decades has done nothing to lengthen those odds. Such a war might have led to the deaths of 100 million Americans and over 100 million Russians. 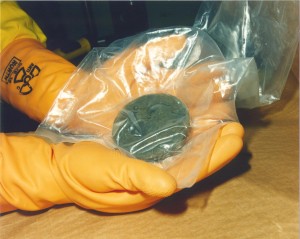 A technician holds a sample of plutonium. Only a small amount of plutonium (8 kg or less) is required for a basic nuclear bomb.

Fortunately, since the end of the Cold War and the collapse of the Soviet Union in 1991, the risk of all-out nuclear war has shrunk dramatically. Yet the U.S. and the rest of the world still face other kinds of nuclear danger such as nuclear terrorism (which President Obama has described as “most immediate and extreme threat to global security”) or the collapse of the global nuclear order, which could be as fragile as the global financial order was four years ago, when conventional wisdom declared it to be sound, stable, and resilient.