Alexander Alexeev was the Soviet ambassador to Cuba from 1962 to 1968. During the missile crisis Alexeev had privileged access to Castro as his chief Soviet confidant, which allowed Alexeev to relay information back to the Kremlin about Castro’s views and reactions as events unfolded. He was also in a position to caution Castro against any rash actions or provocations that could further aggravate the situation and lead to nuclear war. On October 27 Alexeev informed the Kremlin that Castro believed a U.S. strike was imminent and had urged the Soviet Union to strike first with nuclear weapons against America, a message that Khrushchev found very alarming, as it would mean the start of a thermonuclear world war.

Anatoly Dobrynin served as Soviet Ambassador to the United States from 1962 to 1986, playing a key role in Soviet-U.S. relations during the Cold War. Dobrynin was not told by the Kremlin about the decision to deploy missiles to Cuba, and on September 4, 1962 he had misinformed Robert Kennedy that only defensive Soviet weaponry had been sent to Cuba. During the crisis Dobrynin held secret meetings with Robert Kennedy. These private discussions were an important backchannel for communication between Khrushchev and President Kennedy to help work out a solution to the crisis. In a crucial exchange on October 27 Robert Kennedy made clear to Dobrynin the threat of an imminent U.S. attack, while at the same time privately conveying to him the President’s assurance that the Jupiter missiles from Turkey would be withdrawn in four or five months. 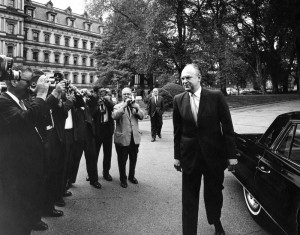 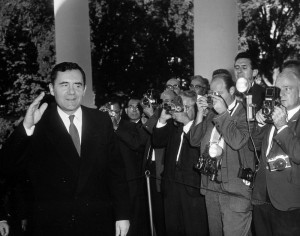 Andrei Gromyko was Soviet Foreign Minister from 1957 to 1985. He had reportedly initially opposed the idea of placing Soviet missiles in Cuba, and was worried about the U.S. reaction after their discovery. On October 18 Gromyko met with President Kennedy, unaware that the President already knew about the missiles. Gromyko read out a statement asserting that Soviet aid to Cuba was solely to improve Cuba’s defense capabilities. Kennedy did not disclose his knowledge of the missiles, but in response re-read his September 4 statement, reminding Gromyko that the U.S. would not tolerate offensive weapons in Cuba. After the meeting, Gromyko concluded that “a USA military adventure against Cuba is almost impossible to imagine”, and the Kremlin did not suspect the U.S. discovery of the missile sites until the announcement of Kennedy’s television address to the nation on October 22. After the missile crisis, Gromyko was involved in the negotiations of the Partial Nuclear Test Ban Treaty as well as SALT I and II.

Kuznetsov was First Deputy Minister of Foreign Affairs for the Soviet Union from 1955 to 1977. During the missile crisis he proposed to counter the U.S. blockade with pressure against West Berlin, an idea Khrushchev rejected. On October 28 Khrushchev charged Kuznetsov to meet with UN Secretary General U Thant and the U.S. negotiating team of Adlai Stevenson and John McCloy to work out the details for the withdrawal of the Soviet missiles from Cuba and the settlement of the crisis.

Rodion Malinovsky was Soviet Defense Minister from 1957 to 1967 and oversaw military assistance to Cuba. He was consulted by Khrushchev about the deployment of missiles to Cuba and was responsible for supervising their secret transportation and installation. He had drafted and initialed a Soviet-Cuban defense treaty which would have been signed once the missiles were to become operational. On October 22, as the Soviets awaited President Kennedy’s address, suspecting he would announce an invasion of Cuba, Malinovsky advised against authorizing General Pliyev to use nuclear weapons in response to potential U.S. military action, fearing that if such message was intercepted, the U.S. might use nuclear weapons first.

Anastas Mikoyan was Soviet deputy prime minister during the Cuban Missile Crisis. In the spring of 1962 he opposed Khrushchev’s decision to place the nuclear-tipped missiles in Cuba. In November 1962 Mikoyan was dispatched to Cuba and played a key role in convincing Fidel Castro to accept the terms on which the crisis was settled, while keeping him as Soviet ally. In particular, Mikoyan understood the danger tactical nuclear weapons posed if left in Cuban hands, and on November 22 persuaded Castro that they must be withdrawn. During this crucial meeting Mikoyan rejected Castro’s pleas to keep the tactical warheads on the island, citing a nonexistent Soviet law prohibiting the transfer of nuclear weapons to third countries. Had it not been for Mikoyan’s diplomatic efforts, Cuba would have become the first nuclear power in Latin America.

Penkovsky was a high-ranking Soviet military intelligence (GRU) officer who spied for the UK and the U.S. during the Cold War. He became the U.S.’s best human intelligence asset in the Soviet Union, providing valuable information about the Soviet placement of missiles in Cuba, including details that allowed the U.S. to identify the missile sites. After surveillance, Penkovsky was arrested by the KGB on October 22, 1962 and was later executed for treason.

General Pliyev was commander of the Soviet troops in Cuba. He received instructions not to use nuclear weapons without authorization from Moscow, but in the absence of technical safeguards to physically prevent their use, Moscow relied on Pliyev’s obedience. Pliyev suspected that the Soviet missiles in Cuba had been discovered by the U.S. after the U-2 overflights on October 14, and shared his concern with General Gribkov on October 18, but without proof, they chose not to risk their careers by reporting the suspicion to Moscow. Therefore, the Kremlin did not suspect the discovery until Kennedy’s announcement on October 22.

Valerian Zorin was the Soviet Union’s Permanent Representative to the United Nations during the Cuban Missile Crisis. In a heated exchange at the October 25 emergency meeting of the UN Security Council, Zorin was famously confronted by U.S. Ambassador to the UN Adlai Stevenson with photographic evidence of the Soviet missiles in Cuba and challenged to admit their existence. Zorin stubbornly denied the charges and questioned the photographs’ authenticity.