History of the Cuban Missile Crisis

Home Page // About the crisis

The Cuban Missile Crisis was a pivotal moment in the Cold War. Fifty years ago the United States and the Soviet Union stood closer to Armageddon than at any other moment in history. In October 1962 President John F. Kennedy was informed of a U-2 spy-plane’s discovery of Soviet nuclear-tipped missiles in Cuba. The President resolved immediately that this could not stand. Over an intense 13 days, he and his Soviet counterpart Nikita Khrushchev confronted each other “eyeball to eyeball,” each with the power of mutual destruction. A war would have meant the deaths of 100 million Americans and more than 100 million Russians. 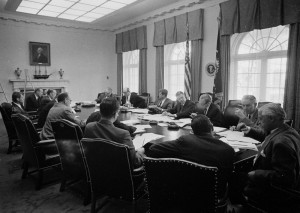 Meeting of the Executive Committee of the National Security Council. October, 29 1962.

Pausing at the nuclear precipice, President Kennedy and the group of advisors he had assembled (known as ExComm) evaluated a number of options. After a week of secret deliberations, he announced the discovery to the world and imposed a naval blockade on further shipments of armaments to Cuba. A tense second week followed, during which neither side backed down. Presented with the choice of attacking or accepting Soviet nuclear missiles in Cuba, Kennedy rejected both options. Instead, he crafted an alternative with three components: a public deal in which the United States pledged not to invade Cuba if the Soviet Union withdrew its missiles; a private ultimatum threatening to attack Cuba within 24 hours if the offer was rejected; and a secret sweetener that promised to withdraw U.S. missiles from Turkey within six months. The crisis was resolved at the last minute when Khrushchev accepted the U.S. offer.

October 17, 1962: U-2 photograph of first IRBM site found under construction

In this section you will find a chronology of the early Cold War and the Cuban Missile Crisis, answers to some Frequently Asked Questions about the Crisis, and links to key documents, photographs, and audio and video resources from the most dramatic period of the Cold War.